The Deposition of Anthony Fauci

The Deposition of Anthony Fauci

While most of the US population was enjoying Thanksgiving week, Anthony Fauci sat under oath to answer questions about the Biden Administration’s unconstitutional and dangerous efforts to bypass our First Amendment.

In the case of Missouri v Biden, the Attorneys General of Missouri and Louisiana are suing the Biden Administration for colluding with Big Tech to censor social media users who questioned or criticized official Covid policies.

To work around the First Amendment, Biden Administration officials identified individuals, organizations, doctors, scientists, and scholars as dangerous (for voicing criticism of government Covid policy). The administration then coordinated with social media companies to deplatform those individuals. This work-around of the Constitution is not only illegal but also a danger to our democracy. The state cannot assign to private sector actors its own violation of our constitutional rights and then claim immunity from the law.

Having fought for months in the Fifth Circuit, Fauci was finally deposed last week. In seven hours of testimony, Fauci couldn’t seem to recall any of the policies that he himself trumpeted on the Chris Cuomo Show, The View, and every other corporate broadcast in 2020 that covered Covid.

Here’s a roundup of the most interesting takes from Fauci’s testimony:

From the Brownstone Institute:

“From our deposition of Fauci yesterday in the MO v. Biden case. Fauci confirmed that in Feb 2020, Fauci sent Clifford Lane, his deputy at the NIAID [National Institute of Allergies and Infectious Disease], as the U.S. representative for the WHO delegation to China. Lane convinced Fauci we should emulate China’s lockdowns.”

From Attorney Jenin Younes of the New Civil Liberties Alliance in the Tablet Magazine:

“The Missouri documents, along with some obtained through discovery in Berenson v. Twitter and a FOIA request by America First Legal, expose the extent of the administration’s appropriation of big tech to effect a vast and unprecedented regime of viewpoint-based censorship on the information that most Americans see, hear and otherwise consume. At least 11 federal agencies, and around 80 government officials, have been explicitly directing social media companies to take down posts and remove certain accounts that violate the government’s own preferences and guidelines for coverage on topics ranging from COVID restrictions to the 2020 election, to the Hunter Biden laptop scandal.”

“And then there are the consequent downstream adverse effects of this kind of censorship—not only on those who are directly censored but on other users of the platform who self-censor to avoid similar punishments. Most concerningly, readers are deprived of access to contrasting information or open debate from which to inform their viewpoints, leading to the false impression of a scientific “consensus” when no such consensus exists.”

Anthony Fauci is one of the most successful bureaucrats in American history; for over 40 years this man has lied, schemed, and harmed the American public to maintain his position, influence, and power.  One small but telling example of his fraud was revealed in his deposition testimony. He claimed he “didn’t have time to worry about the Great Barrington Declaration” (GBD), in which top medical experts in 2020 had proposed “focused protection” of the most vulnerable to Covid in lieu of harmful, society-wide lockdowns. Yet Fauci was emailing his subordinates about GBD to defame it, and went on broadcast news to attack it.

But I have hope here in America. Why? Because in the People’s Republic of China citizens are putting everything on the line to fight back against the current Covid madness. The Chinese people are braving guaranteed oppression, arrest, and beatings to resist the same type of irrational and absurd lockdown policy that was mandated by Fauci here in the US.

Despite China’s tyrannical lockdowns, at least the CCP knew to avoid the mRNA Covid-19 vaccines and vaccine mandates unlike here in the US.

Now why wouldn’t China want to give such safe and effective mRNA vaccines to its people? If anyone has any ideas here, please let us know in the comments.

Louisiana Attorney General Jeff Landry says the public is “going to be shocked” when it learns how little Dr. Anthony Fauci could recall during last week’s deposition about “some of the most important actions and discussions” when he was chief medical adviser to Presidents Trump and Biden during the COVID-19 pandemic.

“I think that the public is going to be shocked as to how much Dr. Fauci can’t recall some of the most important actions and discussions that he had at the time, when the pandemic was on our shores,” the Republican AG said in an interview with Fox News Digital. “It is certainly disturbing. And calls into question, you know, his overall mental capability to remember certain key details.”

Landry, Missouri Attorney General Eric Schmitt and their legal teams interviewed Fauci under oath on Wednesday as part of their lawsuit against the Biden administration. They have accused top-ranking government officials of working with Twitter, YouTube, and Meta, which owns Facebook, “under the guise of combating misinformation” in order to censor viewpoints on COVID that went against the Biden administration’s position.

The two AGs are seeking more information about the top doc’s alleged role in colluding with Big Tech to control communication about COVID-19, including the theory that the virus leaked from a lab in Wuhan, China.

Landry added that Fauci seemed to “not have a tremendous amount of confidence in his vaccine,” since he asked a court reporter in the room Wednesday to wear a mask after she sneezed.

“It was remarkable to see, you know, having the young lady sit next to him for… hours, and she literally sneezed and like, he almost came out of his chair,” Landry said.

Landry couldn’t speak to specific details of the hours-long deposition, as the transcript is under seal by court order, but is likely to be revealed at some point during the litigation.

“What I will tell you is that this is just part and parcel of a bigger legal strategy that we believe ultimately will lead to a successful court case, probably one of the most important First Amendment cases in modern times,” Landry said.

“What we have in front of us is government actors then co-opting and coercing and colluding with private corporations – under which Americans utilize these corporations, these platforms, as basically a virtual public square – and having the government censor American speech,” he said.

“This was something that was cautioned to us at the very beginning of the creation of this country. And it’s a reason that the First Amendment was placed into the Constitution,” he said.

Louisiana Attorney General Jeff Landry, a Republican, is suing the Biden administration for working with Big Tech to stifle opinions on COVID.

“So you just it’s one of those deals where you’ve just got to stay tuned,” Landry added.

In his last White House press conference before he is scheduled to retire after a 50-year career next month, Fauci said, “Every day for all those years I’ve given it all that I have, and I’ve never left anything on the field.”

In a nation where a protest message could get a person jailed, Chinese regime opponents are calling for a new chapter with a blank page.

The blank sheet of paper has become a symbol of resistance among those protesting Beijing’s COVID lockdown policies, showing up at protests across the nation.

The tactic is the latest in a protest against China’s so-called zero-COVID policy, which calls for strict, months-long isolation in order to curb the spread of COVID-19.

While the policy has kept case numbers and deaths down, tolerance for the strict controls has waned, with people in some regions confined to their homes for up to four months.

Protests erupted over the weekend, following a deadly fire Thursday in the western Chinese city of Urumqi, which had been under lockdown for 100 days. The fire killed 10 in an apartment building, leading many to say emergency response was hampered by the pandemic restrictions. 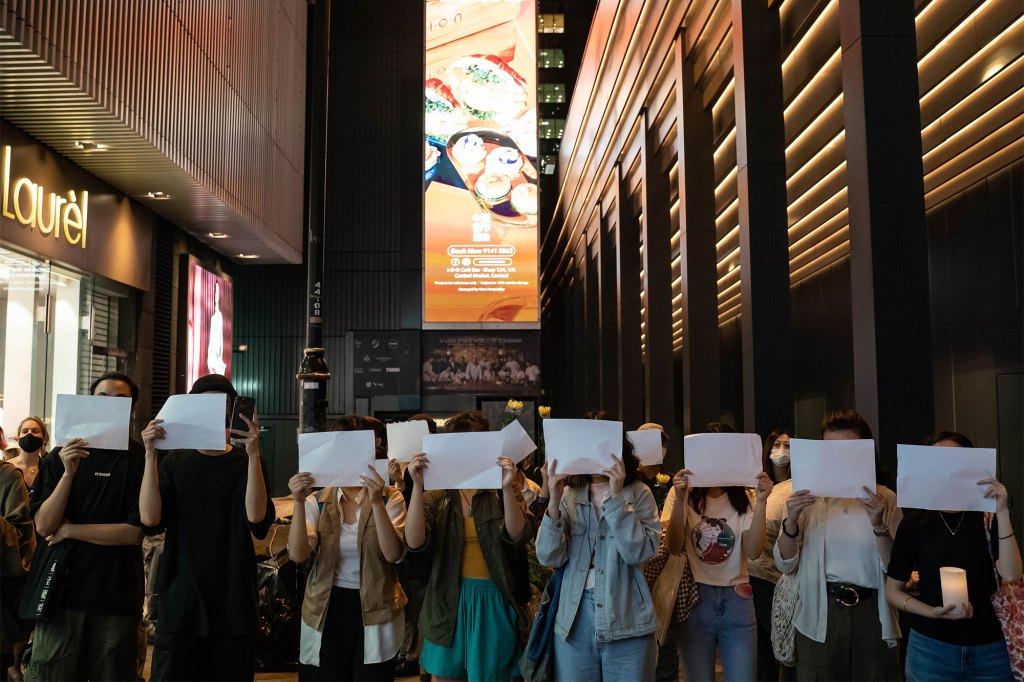 People hold sheets of paper in protest of COVID restrictions in mainland China during a vigil in the central district on November 28, 2022 in Hong Kong, China. 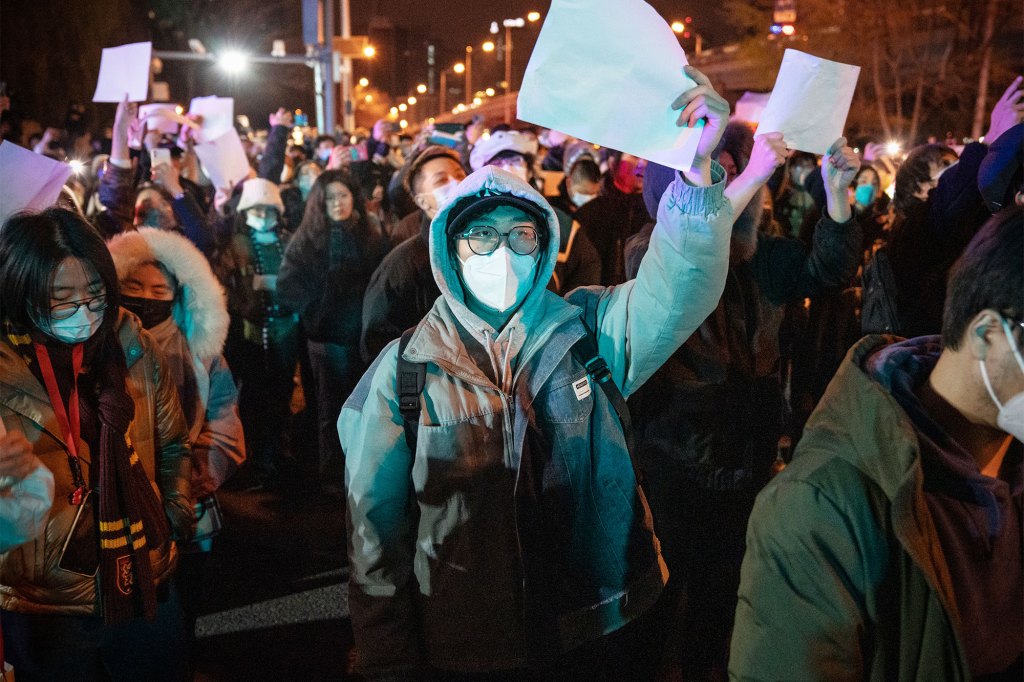 Demonstrators hold blank signs during a protest in Beijing, China, on Monday, Nov. 28, 2022.

“The white paper represent[s] everything we want to say but cannot say,” said Johnny, 26, a student in the capital city of Beijing, who took part in the weekend protests.

“I came here to pay respects to the victims of the fire I really hope we can see an end to all of these COVID measures. We want to live a normal life again. We want to have dignity,” he added.

The paper protest has been spotted among students in Beijing, Nanjing and Shanghai, as well as on posts across China’s heavily censored internet.

The slogan-less signs are not without precedent. Protestors in Hong Kong held up blank sheets of paper in opposition to a 2020 ban by Beijing on certain phrases. Russian protestors resorted to blank signs in March after dissent against the war in Ukraine was outlawed. 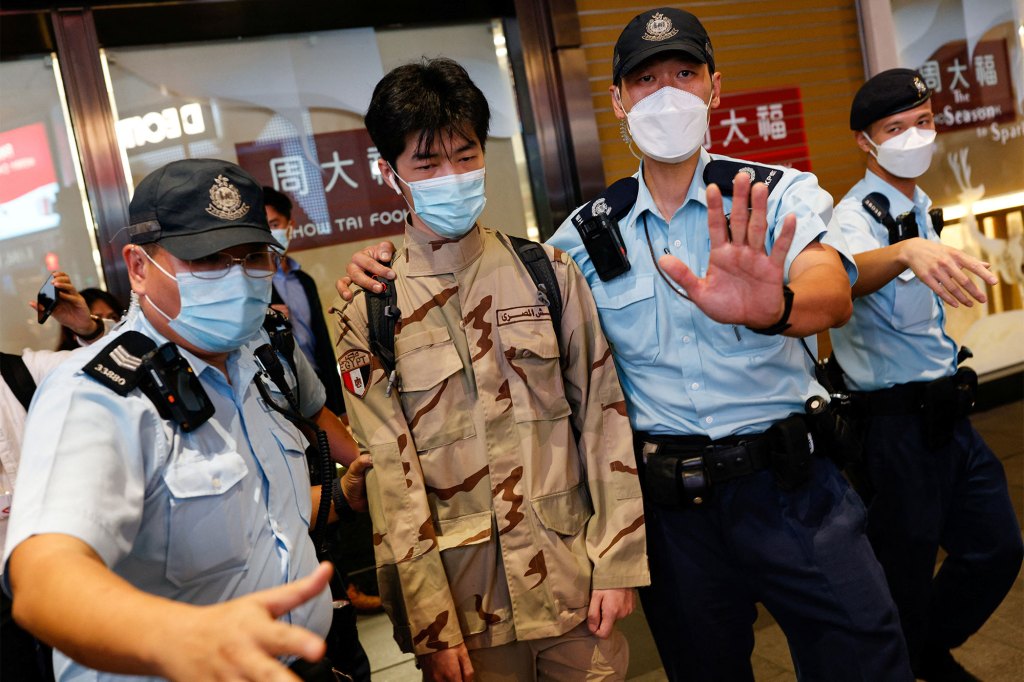 A man is taken away by police after pushing over a protester during a demonstration over COVID restrictions.

But in China this week the tactic has evolved into a symbol of solidarity against the regime, a wordless slogan spread silently past the censors.

When the Chinese social media site Wiebo blocked the hashtag “white paper exercise” on Sunday, one user shot back: “If you fear a blank sheet of paper, you are weak inside.”